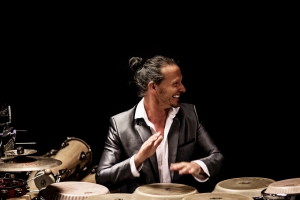 „Nils is not only very musical but he also knows what he is doing!“
Armando Peraza

„I had the pleasure of playing with Nils – he is a great all-round player,
lots of swing and energy all the time.“
Orestes Vilató

„Nils Fischer is at the forefront of keeping the tradition of the tumbadora alive and well in Europe!“
John Santos

Nils Fischer is considered one of the most important European percussionists, touring and recording constantly with Nueva Manteca, with his own groups CaboCubaJazz and Timbazo as well as with many others. Nils played for 12 years with percussion group Drums United and 18 years with the Cubop City Bigband. He has shared the stage with such legendary figures as Giovanni Hidalgo, Pío Leiva, Orestes Vilató, Armando Peraza, Lucrécia, Calixto Oviedo, Paquito D’Rivera, Changuito and Chocolate Armenteros.
Nils studied in Cuba, Brazil, Puerto Rico and at the Rotterdam Conservatory where he obtained his “Masters Degree Percussion” in 1996 cum laude. Nils’ interest in music started at an early age, growing up in a musical family in Bremen, Germany. One of his earliest memories from childhood is his father practicing guitar before gigs at night. His own instrumental experience started when he began to attend piano lessons at the age of ten. He remembers: “One day my sister brought home a Paquito D’Rivera record with Daniel Ponce on congas – this changed my life, all I wanted from then on was to play percussion.” At that time, he would have never imagined that 20 years later he would find himself performing with Paquito in San Juan, Puerto Rico.
Nils has appeared on more than 70 albums as a recording artist.
In 2007 he released a CD with his own group TIMBAZO – ¡Gracias Joe Cuba! Top artists including Brian Lynch & Alain Pérez. It is mixed and mastered by Jon Fausty. Highlight of Timbazo is a concert at North Sea Jazz’ main stage following Herbie Hancock’s performance.
His second solo album with TIMBAZO features an incredible line-up: Lucrécia, José Luís Quintana ‚Changuito‘, Carlos del Puerto, Alexander Abreu, Julio Padrón, Calixto Oviedo, Amik Guerra and others. Mastered by Bob Katz. An extensive tour on major venues in Holland followed.
In 2008, Nils founded the group CABOCUBAJAZZ, with whom he tours internationally. Current highlights are Havana Jazz Festival and Penang Jazz Festival, Malaysia. CaboCubaJazz‘ first CD was published in 2011. The 2017 album release tour was at venues like North Sea Jazz Festival, Bimhuis, Borneo Jazz Festival a.o.
Nils‘ CD’s received rave reviews internationally and they are present on several ‚Best of the year‘ lists.
Since 2000, Nils teaches at the World Music Department of Codarts [Rotterdam University for the Arts], where since 2018 he is head of the Latin music dept. Among others, he gave workshops in Finland, Spain, Austria & Germany. In 1995 he received the award for “outstanding service to Jazz education” in Los Angeles.